Start of the wild trout season 2014 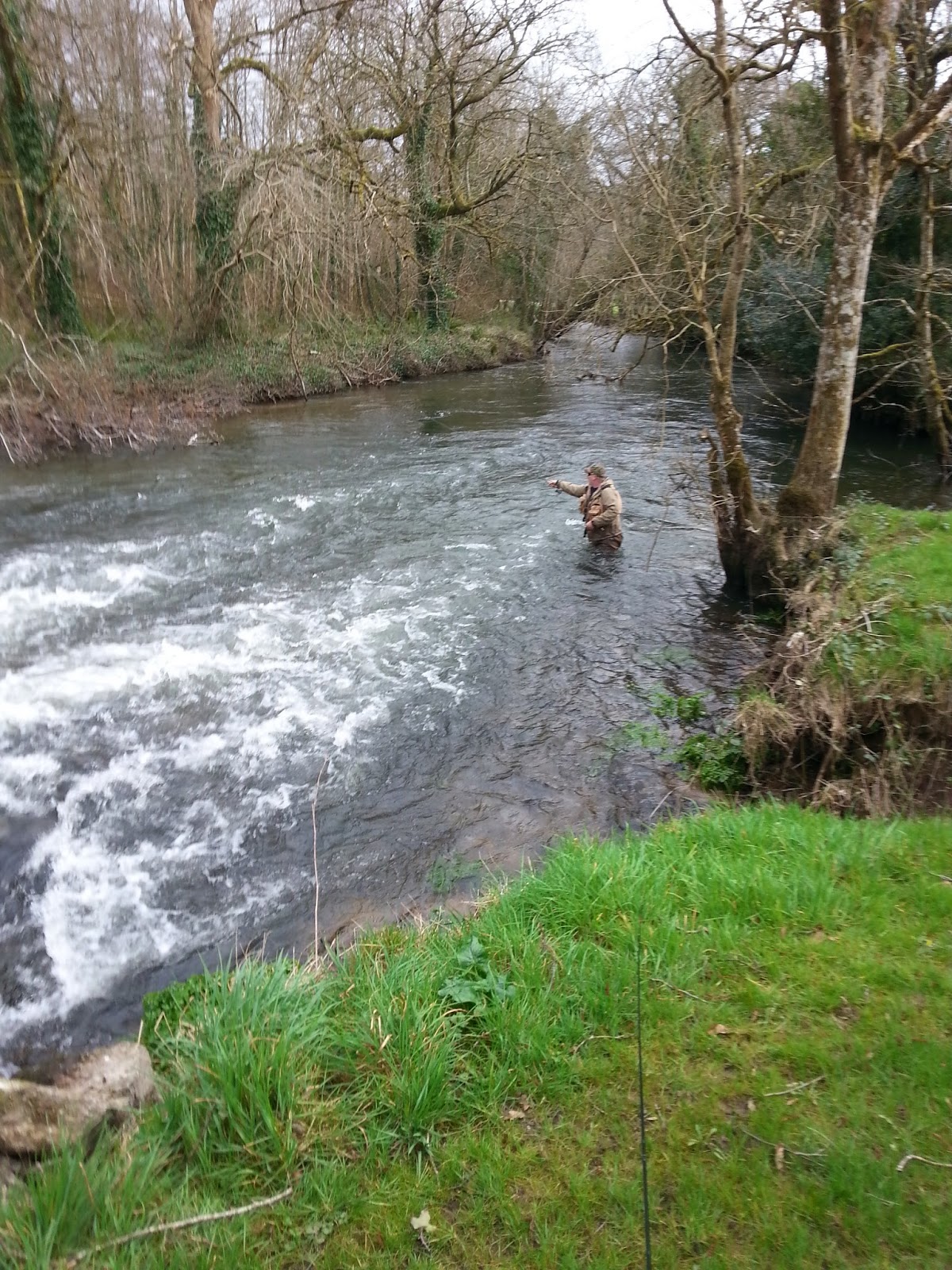 So were off to the 2014 trout season by a couple of weeks and while there is many good reports coming in of good but tough fishing to be had on our rivers the rain and chilly breezes are keeping the trout in there winter state for another while anyway.
I have only ventured out on a few occasions this spring fishing the Blackwater in cork, with some smaller streams down there and the tributaries of the None for a few sessions the weekend with some of the Irish team. I do tend to be a slow starter as the months of April and May do be so busy fishing I am not to upset trying to get some work out of the way in March to make time for the coming months. The water is still a bit cold and it dose not take much rain to colour it up as the ground is still very wet but there is signs of life emerging as a few olives can be seen fluttering in the spring breezes when the sun decides to pop out. Some fish have been caught though and mostly on the wet fly, streamer and up stream nymphing with heavy bugs.
This time of the year we often find that the trout lying back in the slacker water of the pools and once you search them out you often find that you will pick up several from one pocket. 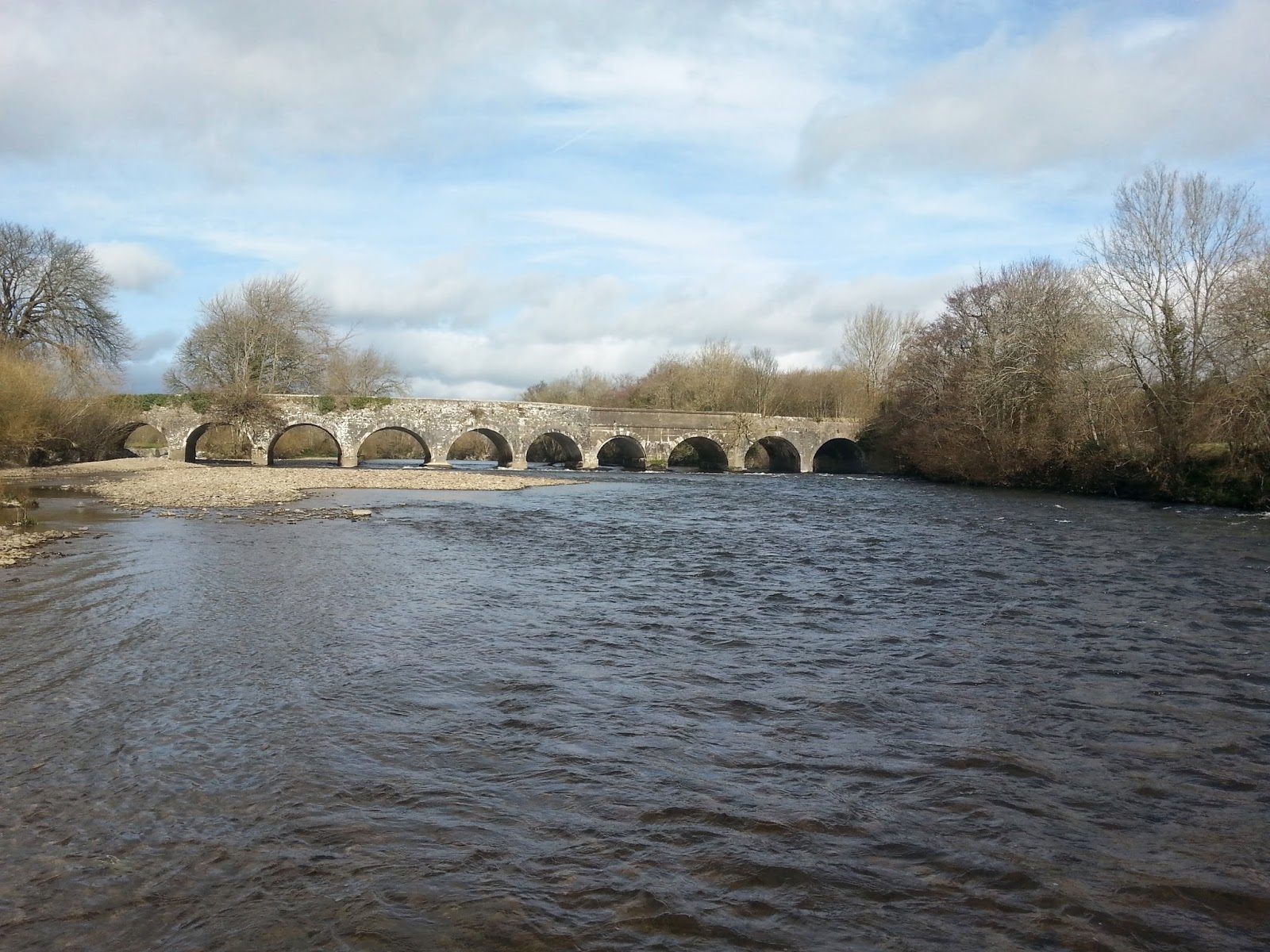 This can involve patience and persistence to find the fish lying, once you have found them then if you present some form of food to their nose they will be hungry enough to snap it up. 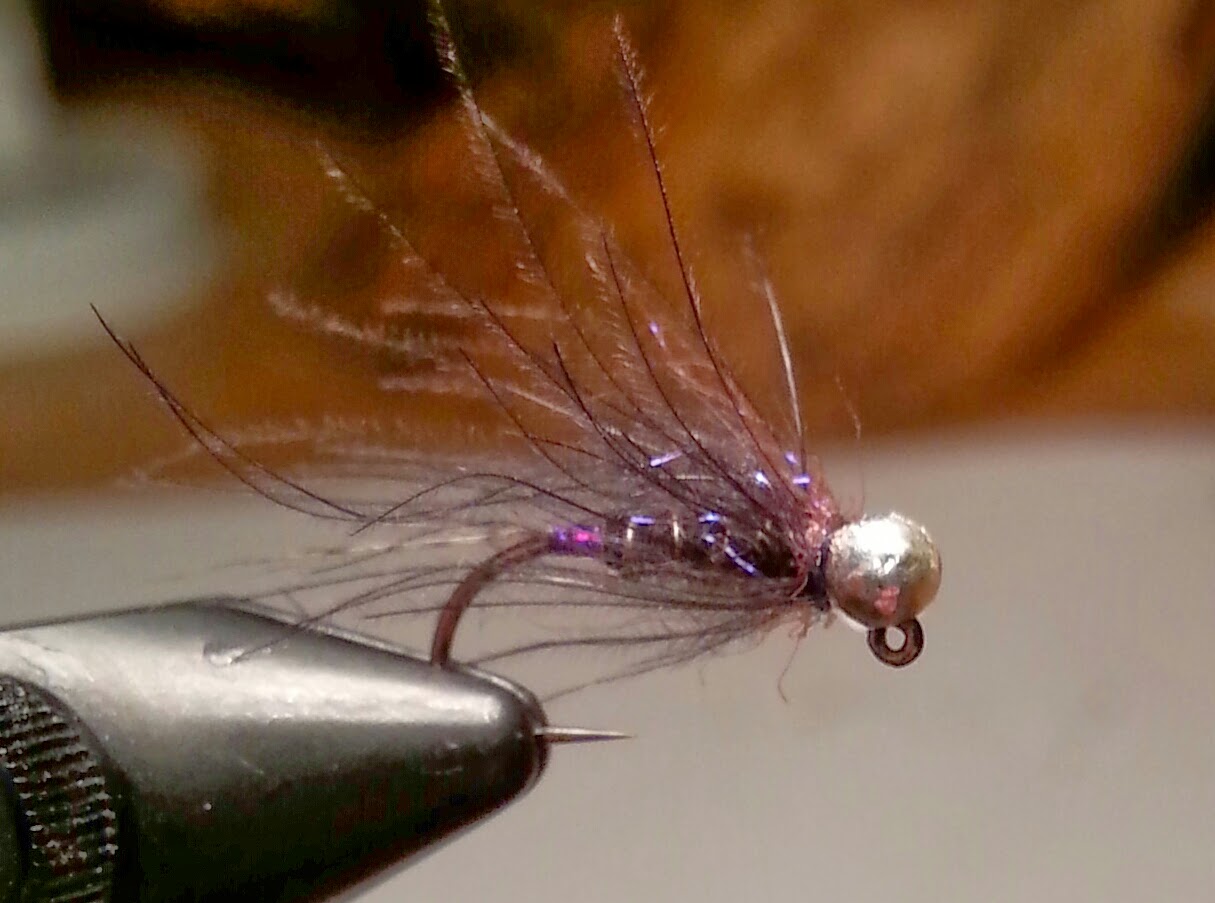 We managed a few nice trout over the couple of outings and the majority of the catching was done on this black CDC purple nymph. With a large hares ear anchor nymph dragging it down to the feed zone of the fish.
Once the temperatures in the nights rise slightly then we will see an explosion of life on waters, for me this is the best time of the year; late March and most of April on the rivers is cracking nymphing and wet fly fishing. 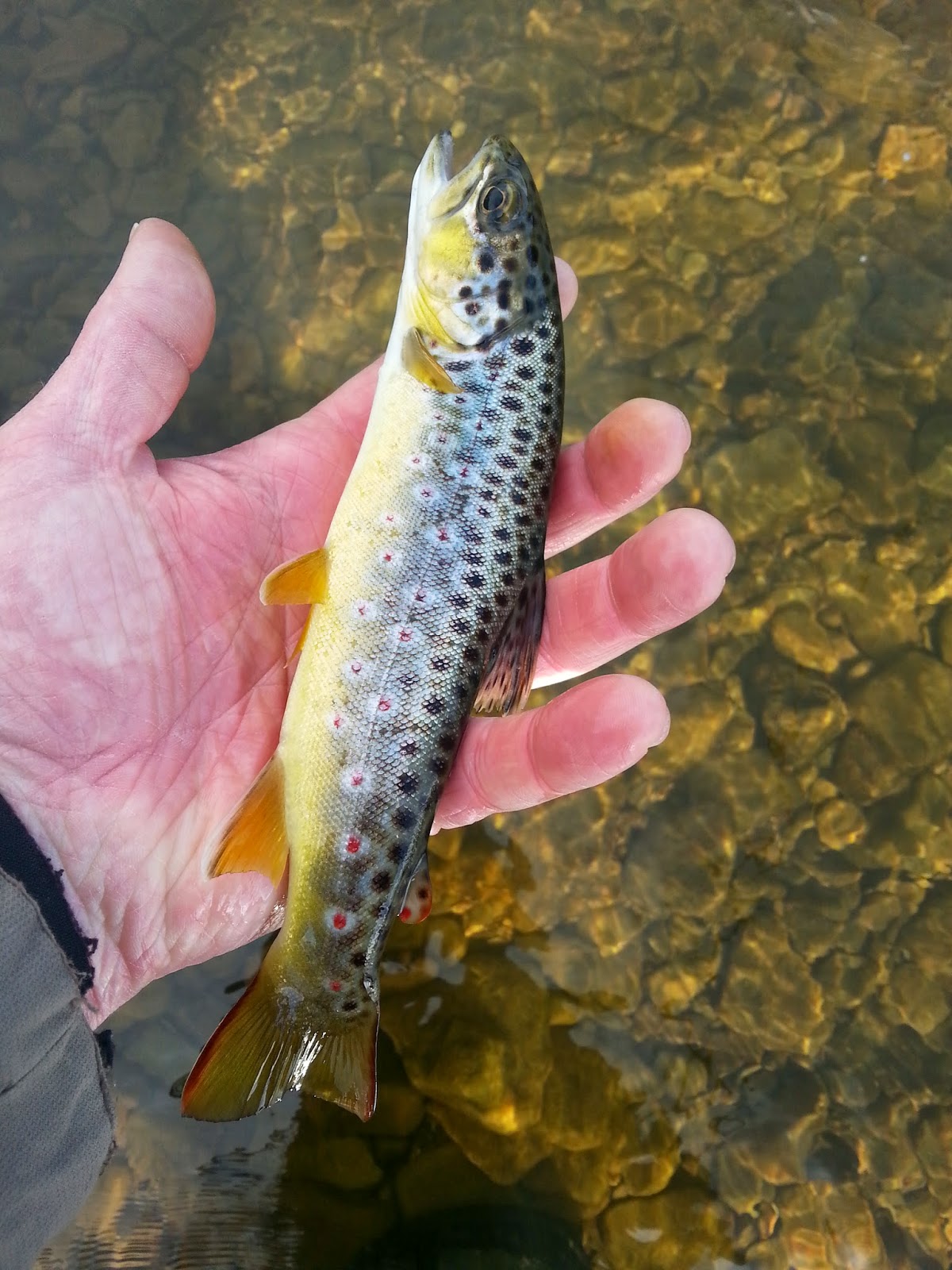 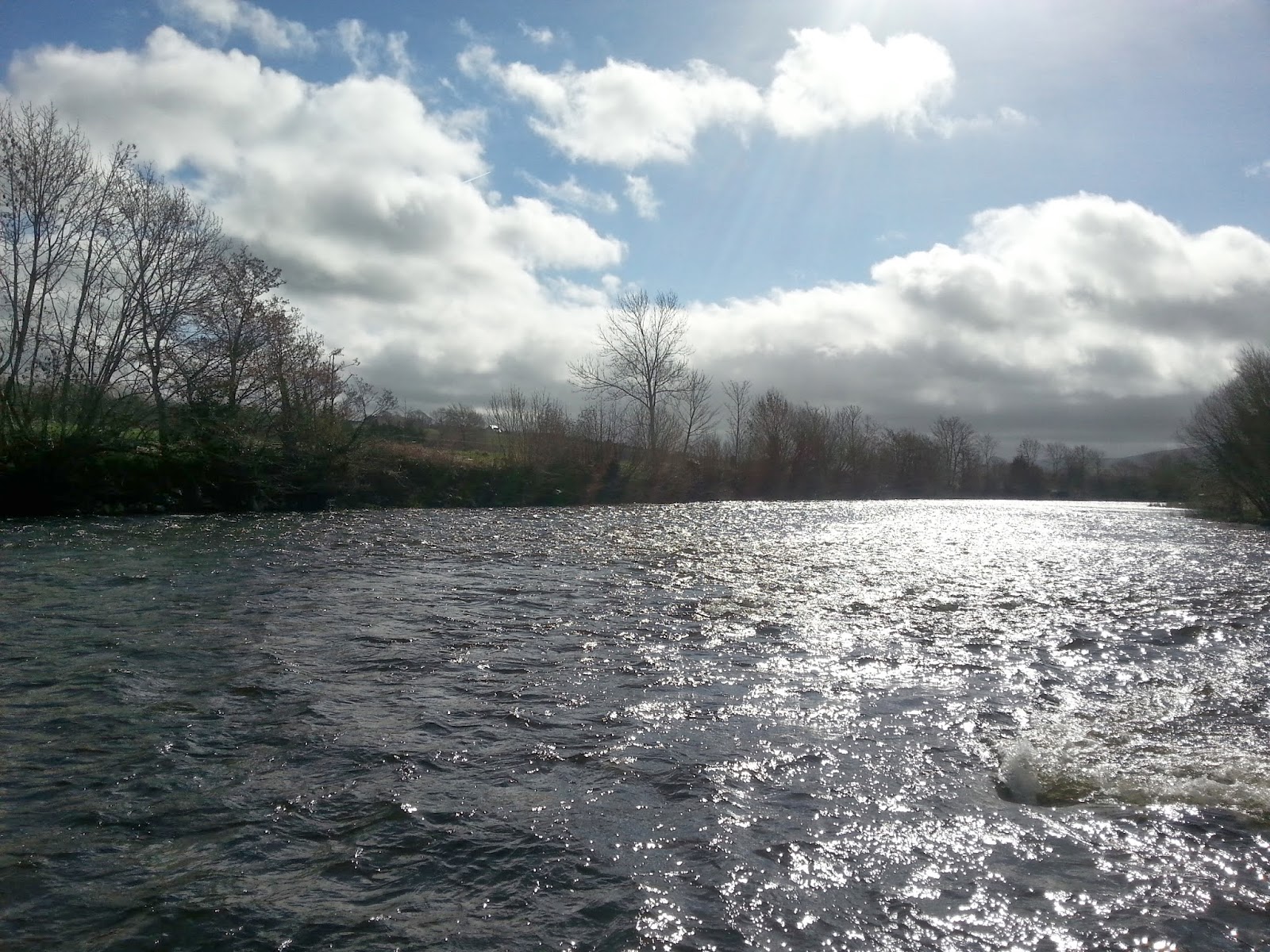 Over the next few months I will be fishing many rivers and lakes of Ireland and I look forward to sharing my experiences good and bad with you here, also see what I am catching on as I fish the different venues. I hope you enjoy reading this post and if you have any comments or questions on early season fishing, fly dressings or leader set ups just drop me a line below, also you can sign in and follow us. Thanks for reading.

Posted by Peter Driver at 10:27 PM No comments: 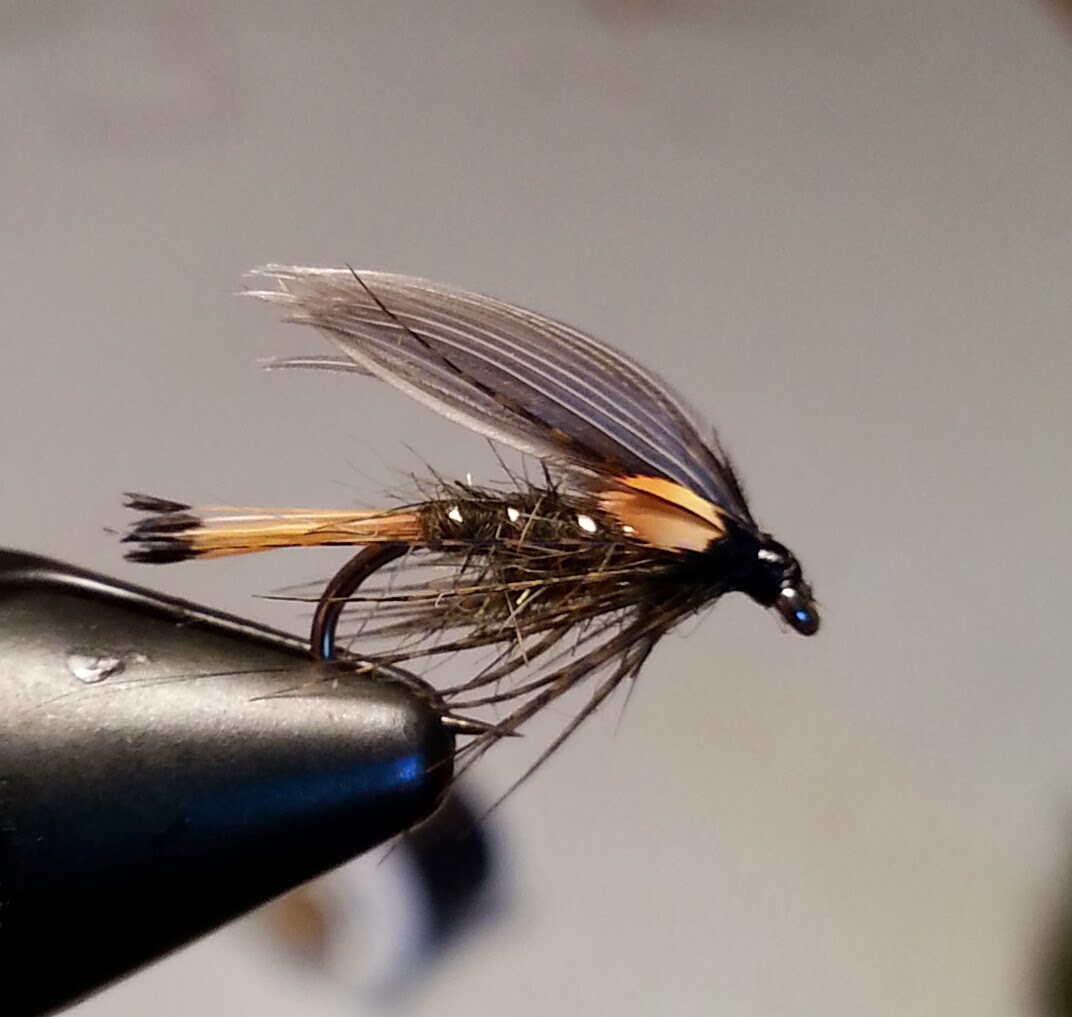 During the months of April and May we will see many forms and colours of flies being cast out by anglers into the waters of our lakes hoping to catch a spring trout. This time of year hatches of duck fly and olives can be found fluttering around in the late spring breezes as the temperatures begin to rise.This is a fly that is worth trying on the cast when the mix of naturals are between the ducks and olives. The wing has many variations and a lot of fly-tyers will used folded bronze mallard or mallard paired wings among others, for this particular fly I like to use Teal feathers as I prefer the lighter colour grey it supplies to the fly. Here is the step by step of how to tie this trusted fly; 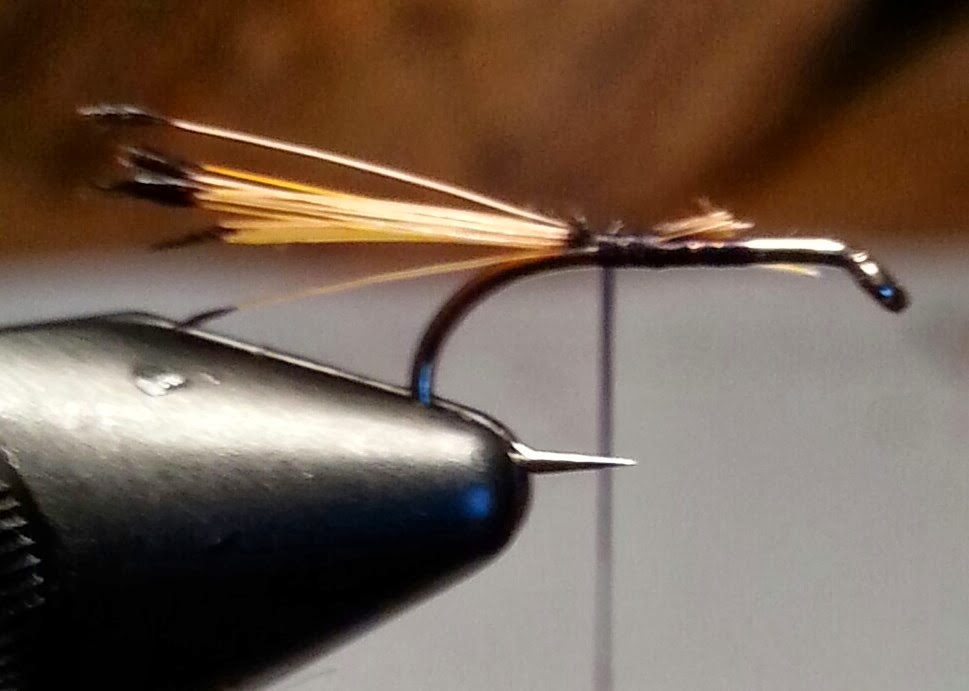 Place a size 14-12-10 Kamasan hook in the vise and attach black twist tying thread, then take a pinch of golden pheasant tippets 6/7 and attach them as the tail of the fly. I like the tail to be in or around the length of the shank of the hook. 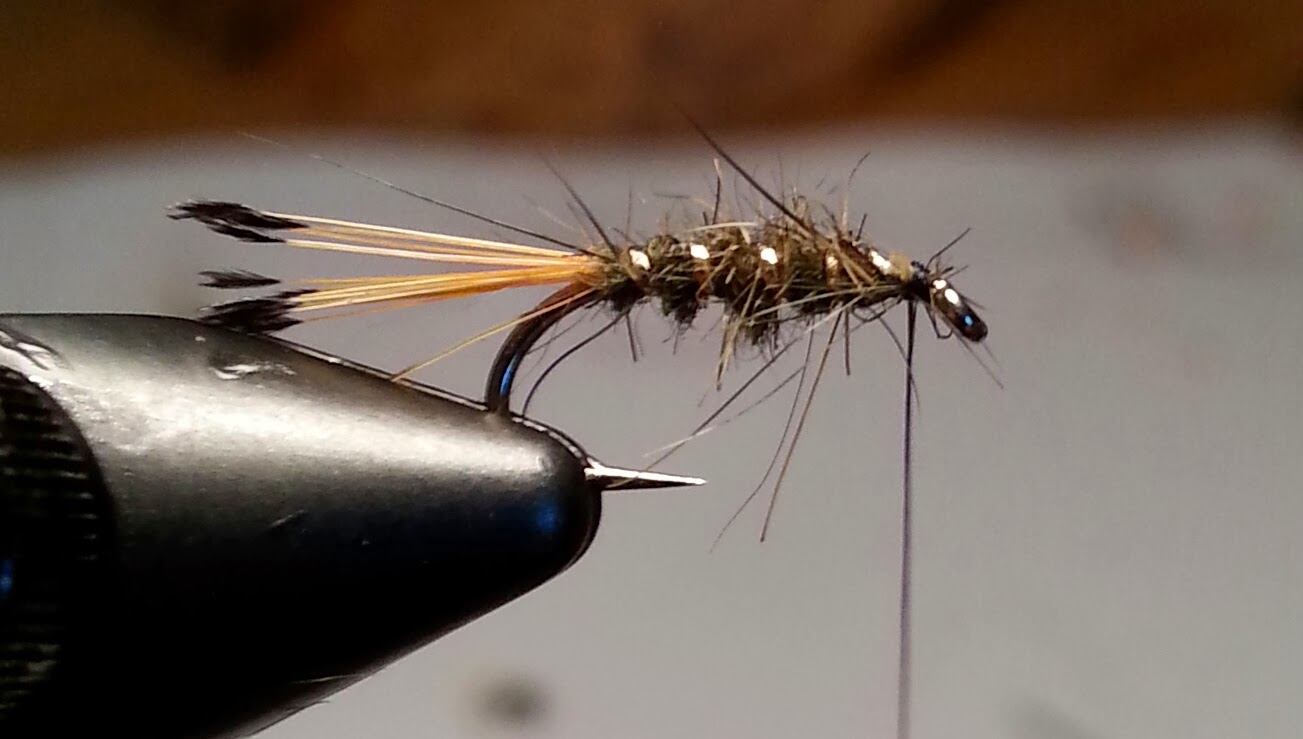 Attach some oval gold ribbing and bring forward the body of dark olive squirrel  dubbing and follow up the body with equal turns of the ribbing, secure the rib and slightly brush out the body to create a fishy look to the fly.

Taking some bronze mallard dyed dark olive select a section and cut free to be used as the under hackle or beard Hackle. 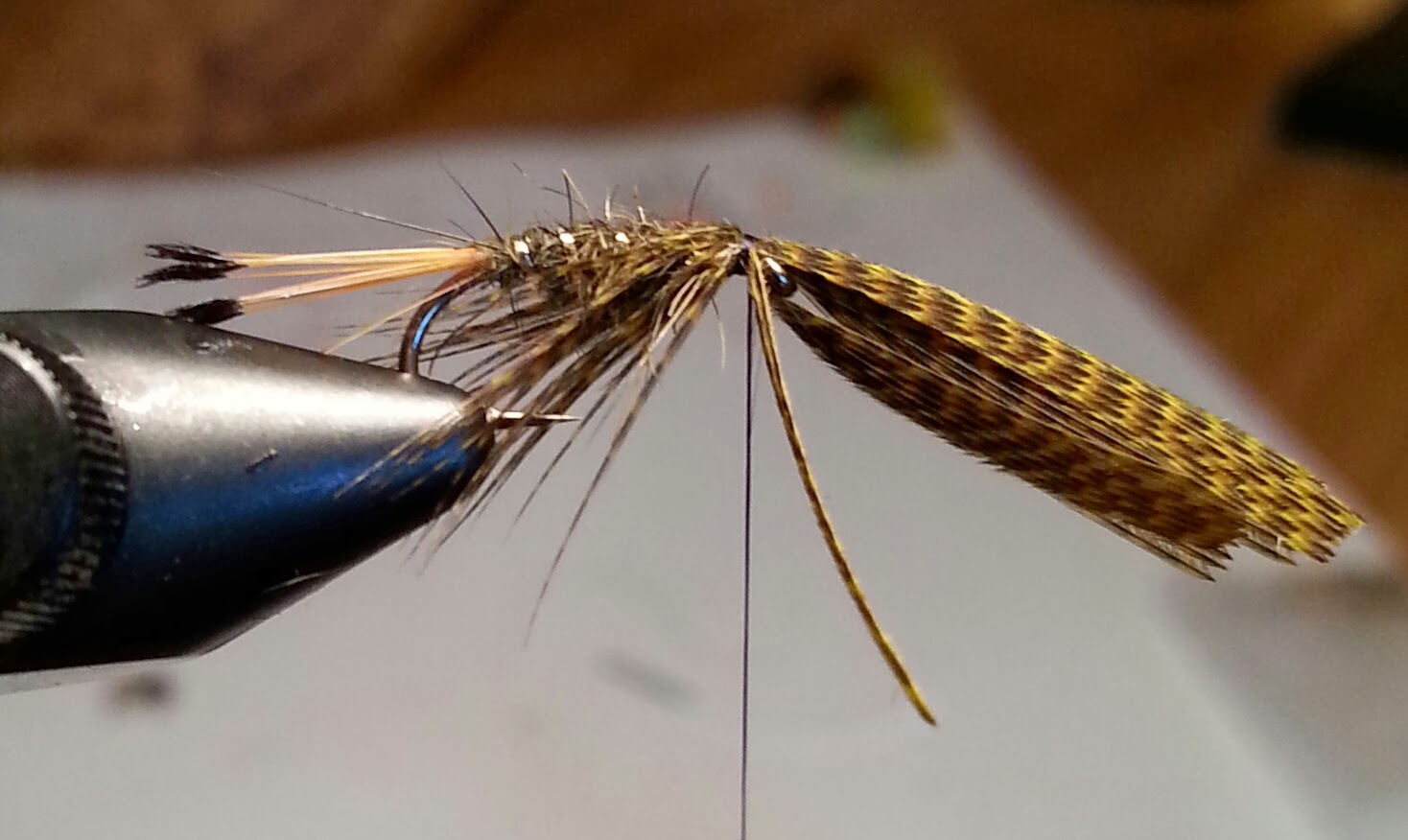 Tie in the mallard and pull it slightly to the underside of the fly as you secure it in place with the thread leaving room to tie in the wing on top of the body. 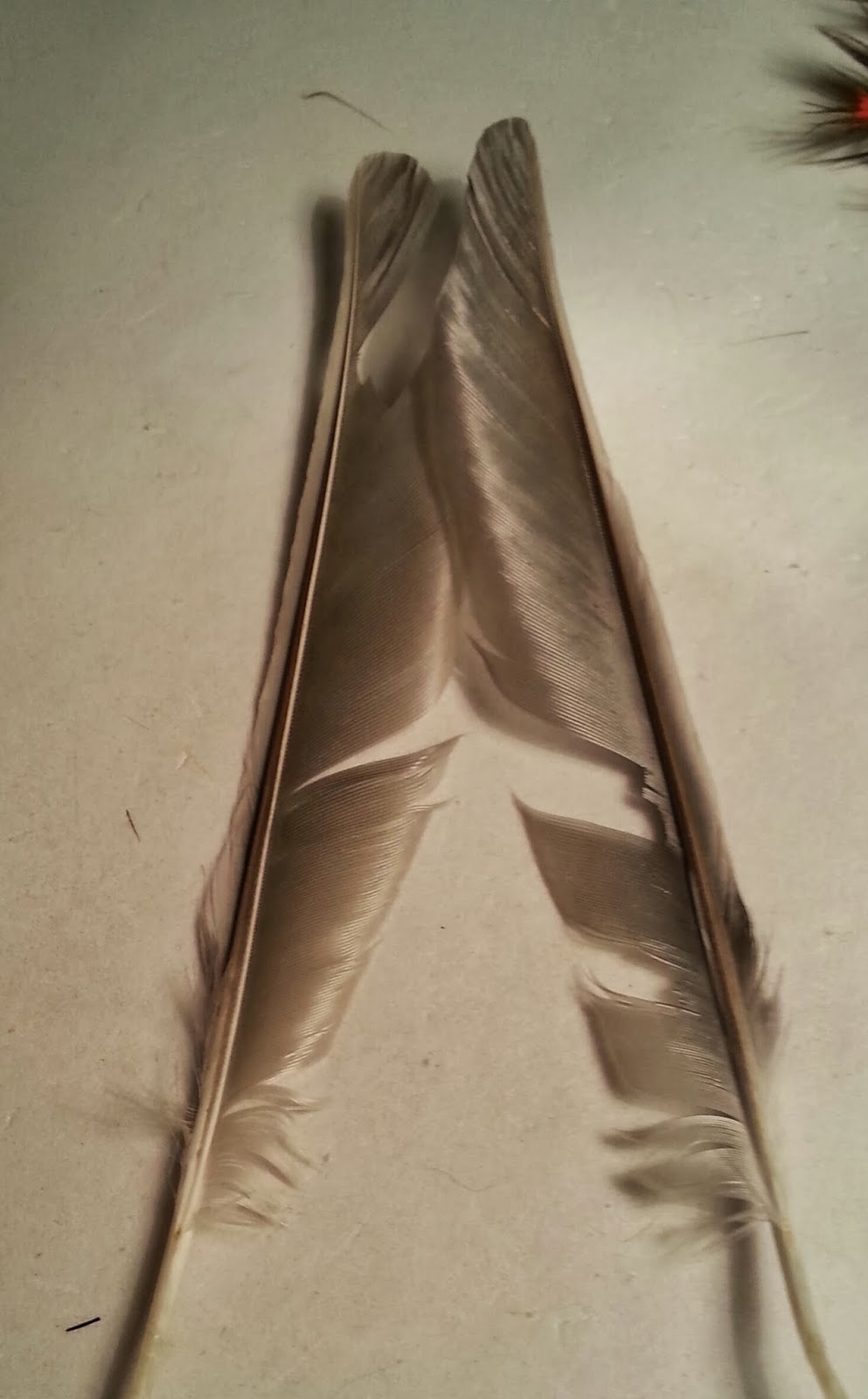 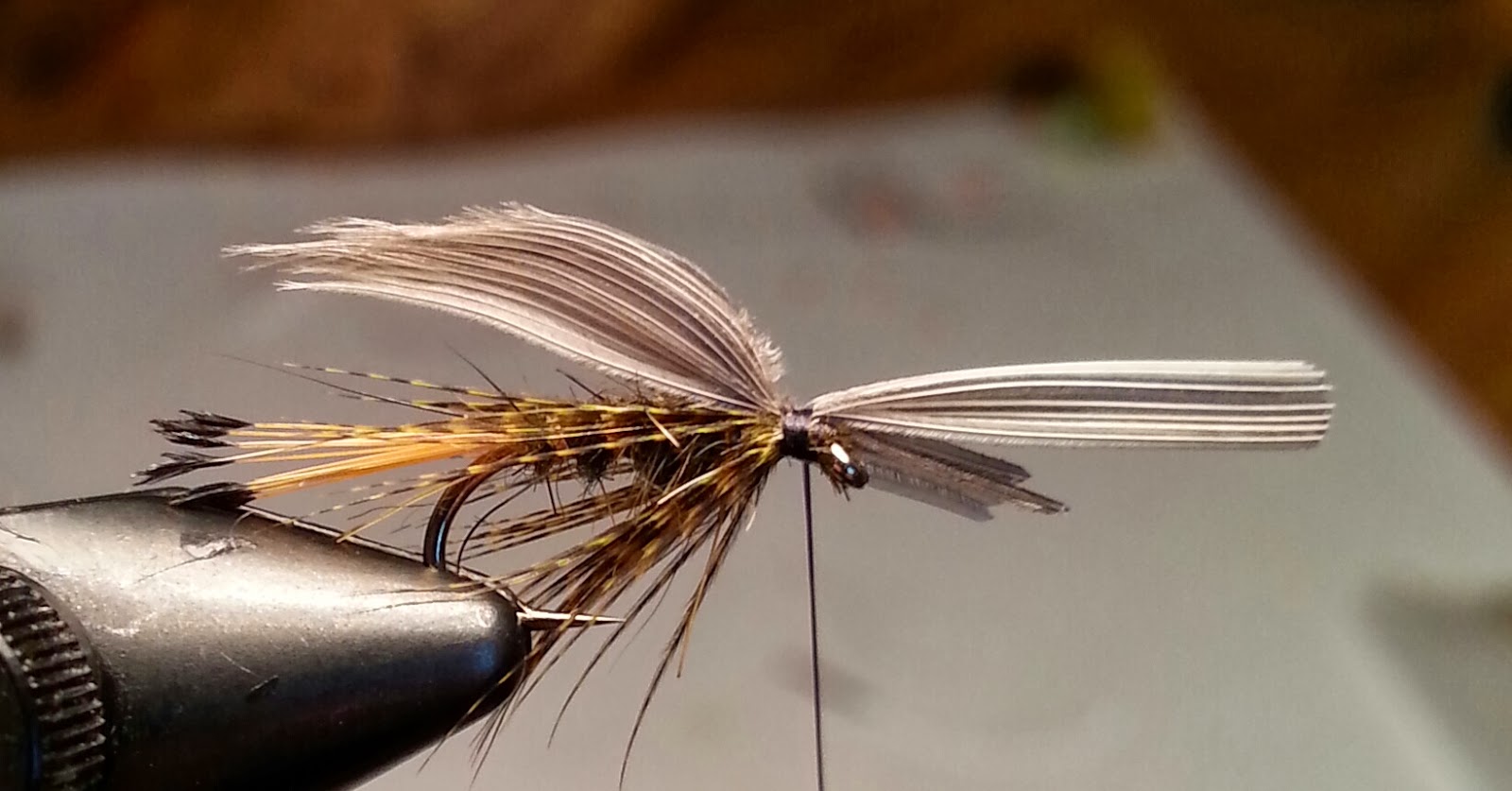 Taking a pair of opposite feathers form the wings and cut away two equal size slips to be placed on top of each other to form the paired wing for the fly. Tie in directly on top of the hook to leave the wing upright and looking good on both sides.

Taking two equal sized jungle cock cheeks, clean off the down on the feather and attach them to the sides of the fly's as cheeks. secure them well and tie off the fly with the usual finishing knot; some varnish and your fly is ready. This is not the simplest of fly's and the wings might take some  practice for a young fly-tyer or beginner, also proportions are very important here with tail lengths and hackles, but practice make perfect so take your time and do one section at a time; just getting that right and before you know it you will be knocking these out for fun plus catching lots of fish with them too.
I hope you enjoy reading this post and if you have any comments or questions on early season patterens just drop me a line below, also you can sign in and follow us. Thanks for reading.

Posted by Peter Driver at 1:30 PM No comments: 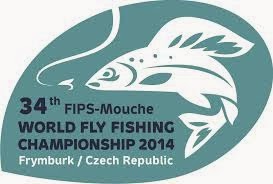 The team selected to compete for Ireland in the coming World Championships in Frymburk, Czech Republic from the 27th of May to the 2nd of June are: 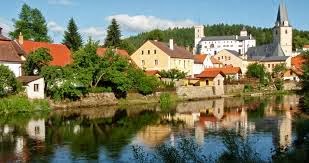 After a team meeting two weeks ago the team decided they will travel to the event on the 21st of May to have a few days practice in the area before the competition begins.  The competition will be a well organised event with some 25 plus teams competing over three days and five three hour sessions on 3 rivers, lake from a boat and a bank session. The days will be long with early starts and competition water that will test any anglers abilities and stamina.

A beautiful piece of water between Lipno reservoir and the equalizing reservoir of Lipno 2. The flow is regulated all year-round and very stable, offering fishing for abundant native brown trout in a deep wooded valley, full of big boulders. Flyfishing here is very exacting, although the boulders are not slippery, it is necessary to ponder every step you take. The river width varies between 5–10 m, depth ranges between 0.50–1.5 m, but they are also pools with depths of 2 m.
Sector 2 · Vltava 29, lake Lipno II

One of the first stillwaters to be stocked with rainbow trout in the Czech Republic. A stable water level will be maintained during the competition, the depth of the lake varies from 0,5 m in the tributary to 6 m close to the dam. Fishing will mainly be for stocked rainbow trout (30-60 cm), other fish include coarse fish: perch, carp, pike, roach, zander and bream.

One of the best trout fisheries in the Czech Republic. Thanks to strict fishing rules (fly-fishing only, barbless hooks only, minimum takeable size 40cm grayling and 45cm brown trout) helps protect the native population of brown trout which in addition is still regularly supported by stocking. The fishery is also stocked with rainbow trout (30-60cm) and grayling. Grayling and other fish species are unfortunately regularly affected by over-wintering cormorants feeding on them.
The stable water flow of 10 m3/s will be maintained during the competition. The river flows through a mainly forested valley, it varies with a mixtures of runs and deeper pools, the river bed also varies between sandy gravel to stony reaches, often covered by water macrophytes. The width of the river varies between 20 – 30 m, depth between 0.5 – 1.5 m; banks are covered with tree vegetation.

Květoňov lake is a small trout reservoir near the town of Kaplice with an area of 6.5 ha. It was one of the first trout lakes in the Czech Republic and it is annually stocked with about 2.3 tonnes of rainbow trout and is also famous also for big pike. The depth of the lake close to the bank varies between 0.5 and 10 m. The banks are covered with natural vegetation, but without trees. Lake will be stocked by approximately 1200 pieces of rainbow trout (30-60cm) before the competition. Other fish species include pike, carp, perch and roach, occasional brown trout, brook trout and white fish.


The river has a similar character to Sector 3, the river is a little slower and occurrence of other fish like dace and chub is higher. This sector will be stocked with rainbow trout (30-60cm) before championship, fish will be stocked from a raft and every beat will be stocked with the same number of fish. We recommend all flyfishing methods to cover the water and all fish species.

Posted by Peter Driver at 8:47 AM No comments: