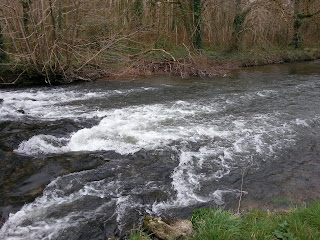 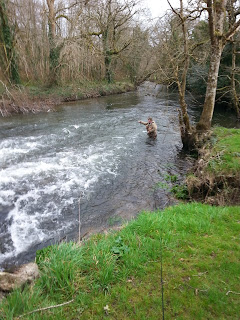 It wont be long now till the fresh smells of spring fill the breeze along the river banks, and for a lot of angler this time of the year they firstly chose nymphs, spiders or wet flies to lure their catch, and indeed they can be very productive for the awaking hungry trout. However there is always the opportunity for some early season dry fly fishing during the mid day in the spring sunshine, which can be very entertaining and productive.
Some seasons ago in some magazine I read an article on a fly that was a useful dry for bringing up spring time fish on the blind.

"The Jingler"  was described as a versatile pattern that enticed hungry trout to break the surface during the early parts of the season. Intrigued by the attractive and simplistic look of the fly I tied several and sure enough it produced some real sport on my local river in March and April. 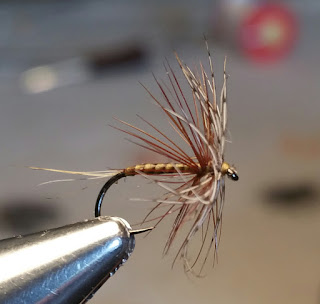 Another aspect of this fly is that not only fishing it directly upstream will it catch you fish but it can even be more effective swinging or scattering across the stream, as do the natural olives at this time of year when been blown by the breeze. It would be good to remember also that allowing the fly to swing and come around down stream can also be worth a go for a fish who would prefer a spider pattern type fly just under the surface.

This is a fly that should be in every anglers box heading out on the rivers this spring, and don't be stuck to the one colour, vary the hackle colours and body material for a range to suit all the trouts hungry eyes. It is a simple fly to tie and the original has the hackles protruding over the eye of the hook in almost an upside down umbrella look, but the hackle straight up or slightly backwards will still do the trick, and keep the hackles sparsely don't I would not be inclined to have too many turns of hackle.

I hope you enjoy tying these patterns and enjoy fishing them even more then I have had. If you would like any of these flies or any other patterns of you choice you can find my contact details on the right side of the blog. Thank you for reading and tight lines.
Posted by Peter Driver at 12:15 PM