Peter is certainly no stranger to the fly fishing Competition Scene, for most of his early twenties Peter dominated local competitions in Co Wicklow, bringing all his new found fishing patterns and styles, he was crowned angler of the year for several years running. 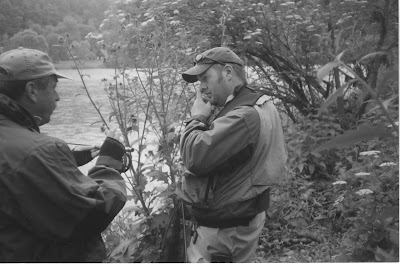 Achieving 3rd place in the Leinster River finals in 1998, Peter went on to finish 3rd in the National finals in 1999 and his first taste of international competition beckoned. Peter made the Fly Fishing  Team Ireland and traveled to Sweden in 2000, to compete in the World Fly Fishing Championships.

This learning experience opened a whole new frame of thinking which Peter in incorporated in to his fly fishing and fly tying. In this year Peter won the Leinster River Finals and the majority of local competitions, it was this year that he was picked by the Trout Anglers Federation of Ireland as the captain of the National Fly Fly-fishing Team due to travel to Scotland for the European Fly Fishing Finals in 2001.
For most of his childhood, Peter spent his time with his Father and Uncles hunting wild brown trout in the mountain streams of Wicklow. It was from these outings that a desire grew for fly-fishing and fly-tying.
Growing up surrounded by fly-fishing, Peter began tying flies at the age of 12 and dedicated hours every day to the craft of imitating the natural species on his local rivers and lakes.
As soon as he was old enough to drive, Peter began to broaden his knowledge and travelled across Ireland every weekend studying fly-fishing and competing in the field, along the way meeting fly tiers from his father’s generation and gathering more and more skills inthe art that is fly-tying.
Throughout these years Peter also delved into the administration end of the sport to gain a full understanding of the competitions. Peter has held positions such as:
During this time Peter began teaching the youths of Fly Fishing Team Ireland, the methods they needed to be successful at fly fishing and tying.
In the years of 2004, 2005 and 2006 Peter captained and managed the Irish youth Fly Fishing Team to countries such as Norway, Czech Republic and Portugal for the World Finals.
But along with coaching the youths, Peter was still in competition mode himself and in 2004 was second in the Leinster Rivers and went on to win them the following year in 2005.
Also in 2005 Peter finished 4th in the National River Competition and earned his place on the National Team going the Poland in 2006 for the European Fly Fishing Championships, which he was also nominated as the manager of the team.
After taking a break from the competition scene Peter returned in 2010, to win the National Lake Championships in Galway and will now renter the international competitions in Slovenia 2012 for the World Fly Fishing Championship.
Peter also booked his spot on the Fly Fishing  Team Ireland to Slovakia in 2012, for the European Finals through the River Championship. 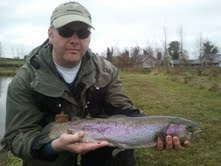 Peter has devoted most of his life to fly fishing and the art of fly tying.
He has travelled extensively across the world in search of fish to be caught and new ideas to improve his ability in both fields.
Peter is looking forward to again competing against the worlds best fly anglers in 2012.

If you would like to read more about Peter’s experiences in Fly Fishing or Fly Tying, please check in to his blog... Peter's Blog
Posted by Peter Driver at 10:37 PM