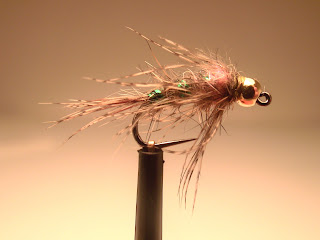 For some people St Patricks day is a celebration of all that us Irish hold dear in our culture, but for me and many other addicted souls the 17th of March is the beginning of seven months of frustration, joy, excitement, anticipation, reasoning and pure bliss, for its on this wonderful Irish day that the fly-fishing season on rivers begins for me. Leading up to this day many anglers prepare in different ways, some dust off the fishing gear in the garage and check if they have enough mono left over from last year. Some anglers begin their preparation in the winter months, cleaning the lines and striping the fly boxes of last year’s failures and replacing with this year’s hopeful killers. Due to the opening of many stocked lakes in this country over the last number of years the lake gear hardly ever gets time off these days but its normally for me around late October when I pack away the river tackle and put the fly boxes near the vice to be stripped and restocked for the coming season.

Normally for me coming up to Christmas time ill ponder over patterns that worked for me and how can I develop them to be even more successful next season, then I’ll make a list and put in on the fly tying desk, a list that will grow and change every time I visit it. But that’s just me I like lists. Every angler has his or her own set of flies that they have used time and time again, flies that never let them down. I would start here and replenish my stock of the regulars that never let you down. My preference is to have at least six of every pattern, I also like order to my flies and therefore I have a boxs for nymphs, spiders, wets, and dries ect. I spend the early months of the year preparing these boxes for the forthcoming river season. For the early part of the season I would stock up on several key previously tried and tested patterns to entice the hungry spring trout. Depending on the type of river you come from your early patterns might be different but for me I fish mountain cold acidic rivers to lush midland streams packed with trout and these flies will catch trout in both. 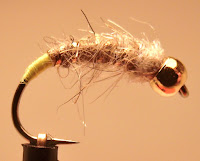 Using the likes of UV Blend dubbing, spectra dubbing and with bright tags, tips you can entice those hungry trout to take. Also squeeze in as much lead as you can in the under-body with out altering the profile of your nymphs, they need to have slender profiles to cut through that deep spring water. Another good tip is to use a old tooth brush to brush your nymphs before they leave the vice this will enhance the fish-ability of the nymphs and help them look more natural to the fish.
Posted by Peter Driver at 6:55 PM