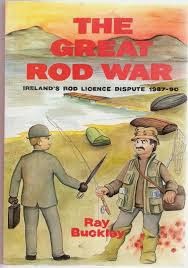 Think for a moment that every weekend you and others from your local community form a group and head out to fill, clean and work on the roads in your local area. Now you also have to buy the shovels, wheelbarrow, brushes etc. Then the roads authority come along and charge you for using the roads that you maintain and if you dont pay they will fine you for not paying. Doesn't sound right does it?

This year Inland fisheries Ireland (IFI) are planning to introduce a new rod licence or angler contribution on all fishing in Ireland for salmon, game, coarse and sea fishing. Regardless of what fishing you are into you will be charged.

For as far back as I can remember and beyond that Local clubs and groups have been cleaning, maintaining, protecting, enriching, funding and educating on the rivers, seas and lakes of this country. The volunteers in these numerous clubs and groups put their time and money into their waters for the love of the recreation and the tradition of being an angler in Ireland.

When I began fishing I was taken all around the County at the expense of my local club who facilitated training for the youths of our community and as far as I am aware in the Rathdrum Trout Anglers and many more clubs this is the case still.  If I ever have kids they will be taught the same way and be educated by the local clubs on how to treat a fishery right because its their local amenity and not just learn how to cast a rod; there is a lot more to fishing than that; it about being a caretaker of something that has happened for generations. We have to support the traditional values of the community in our approach to overcoming this attempted hijack by state bodies on another natural resource that the anglers have protected till today.

For those who say anglers don't pay for fishing in Ireland, I do pay for my fishing and here is a rough breakdown of my contribution based on an average for the last five years of being an active angler in this country:
This is just a bit of my contribution, one person from hundreds of thousands of anglers in this country and for other anglers they commit much more than me. The one thing all the above has in common is the money and hours of volunteering go directly into the fishery and on the water for no gain of any person or fund only the person that walks down the banks and enjoys the natural beauty of our waters, so why do they IFI feel it necessary to take control of this?

According to the bill and outlined by the Munster Council of T.A.F.I in a recent E.G.M the intentions of IFI are to introduce:

(1) A Compulsory Universal angler contribution/licence
(2) A National angler register
(3) A National identity card
(4) Introduce a penalty points system on anglers.
(5) Claim of ownership, takeover or offer for tender by IFI or any state body fisheries identified in any new title research which are already under the management of local clubs and anglers

It appears to me that the Bill is being introduced for monetary gain and very little of the monies sought from the anglers would actually put styles over fences, rake salmon beds, pull out fallen trees, walk the river at 2am in the winter protecting fish or be seen anywhere in the local community. The details of the proposed bill also supports the claims of the IFI attempting to gain control over anglers through identity registration and penalties.

T.A.F.I have come out in several provincial statements condemning the introduction of this bill, here is some of their statements:

"The Connaught Angling council(TAFI) at their AGM in Headford on Thursday night unanimously passed a motion to REJECT the attempt by IFI and the state to introduce A Compulsory angling contribution/licence, A National angler register and an angler identity card or for any of these issues to be legislated for in the new fisheries act.
Munster Trout Angling Council view these measures and others being proposed for inclusion in the new fisheries act as a serious threat by Inland Fisheries Ireland and the state to take control of angling and anglers in this country for monetary gain".

However A.C.I affiliated federations, which T.A.F.I are no longer part of, seem to be supporting this bill, I do wonder who exactly has given these federations consent to speak on behalf of the anglers and clubs of Ireland and I would like to hear their arguments on this debate which seems to be unheard and poorly defended at the moment. The contents of their arguments can not benefit anything or anyone bar the I.F.I and certainly not the fisheries, clubs and most importantly the fish living in the waters of Ireland.

I am opposed to this bill and I will be raising my concerns with local authorities and officials as frequently as possible. We must be aware that if this bill is introduced what will be next we will have to have permits to walk the hills of Ireland  and photograph the environment we live in. This is just my thoughts and views on this topic and I hope you inform yourself of this debate and decide on what you want for our fisheries and speak out before its too late. Here is the link to a face book page that is worth keeping an eye on
https://www.facebook.com/norodlicence
If you have any comments on this post please leave them in the box below or join this blog by entering your email to the right of the page. Thank you for reading.
Posted by Peter Driver at 5:32 PM